Reflections on lost pubs of Salford and North Manchester. 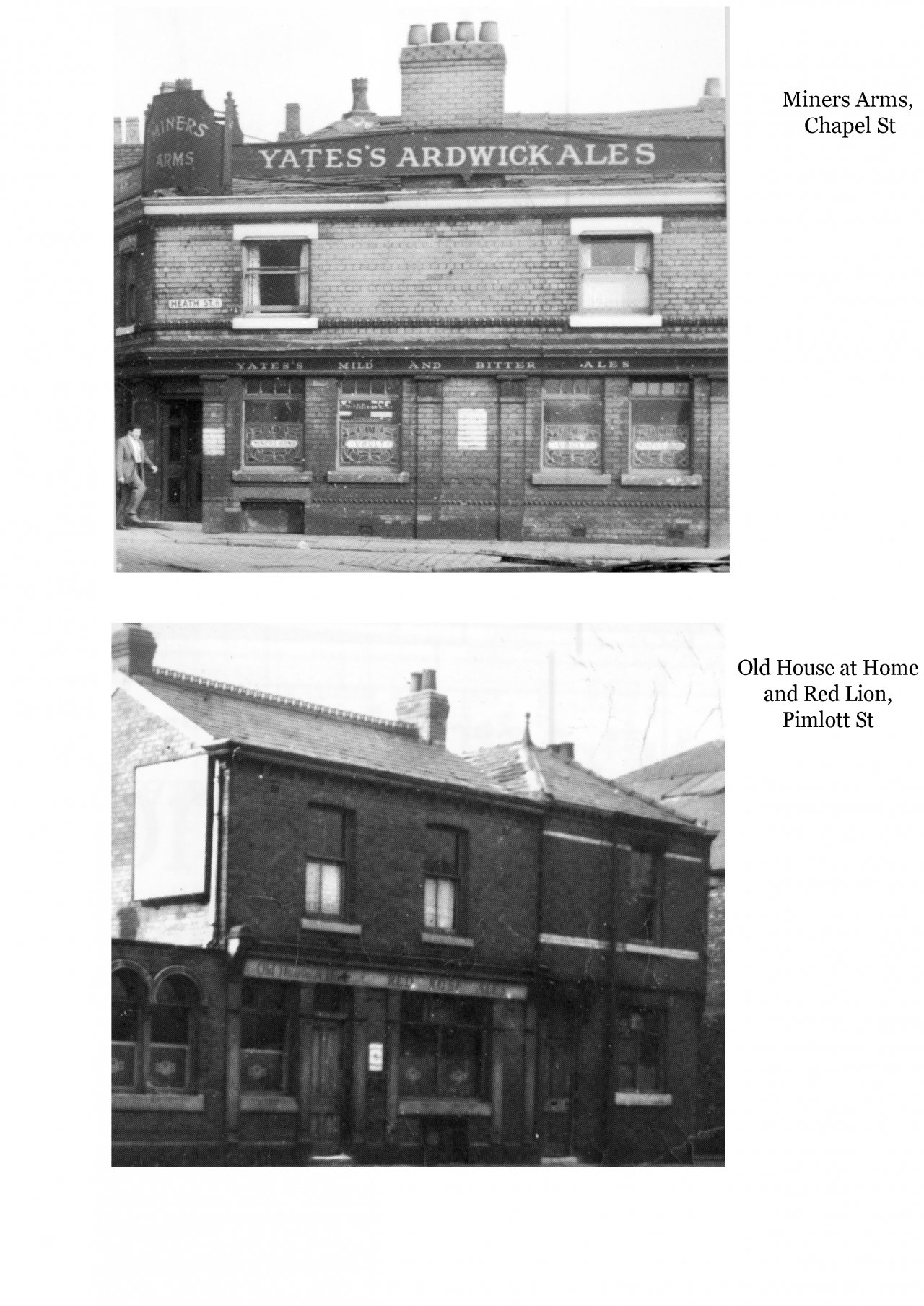 28th April this year will be the 50th anniversary of "Black Sunday", when eight pubs in the Ellor Street area were scheduled to close (one actually floundered on for a few weeks, but its fate was sealed.) This was when the whole area was being redeveloped and much of the housing had gone, but loyal customers still returned for a Saturday night singsong or a game of darts on a Sunday from as far afield as Little Hulton or Kersal. The fact that some long-serving licensees endured to the end reflects the community spirit that the pubs helped to keep alive. 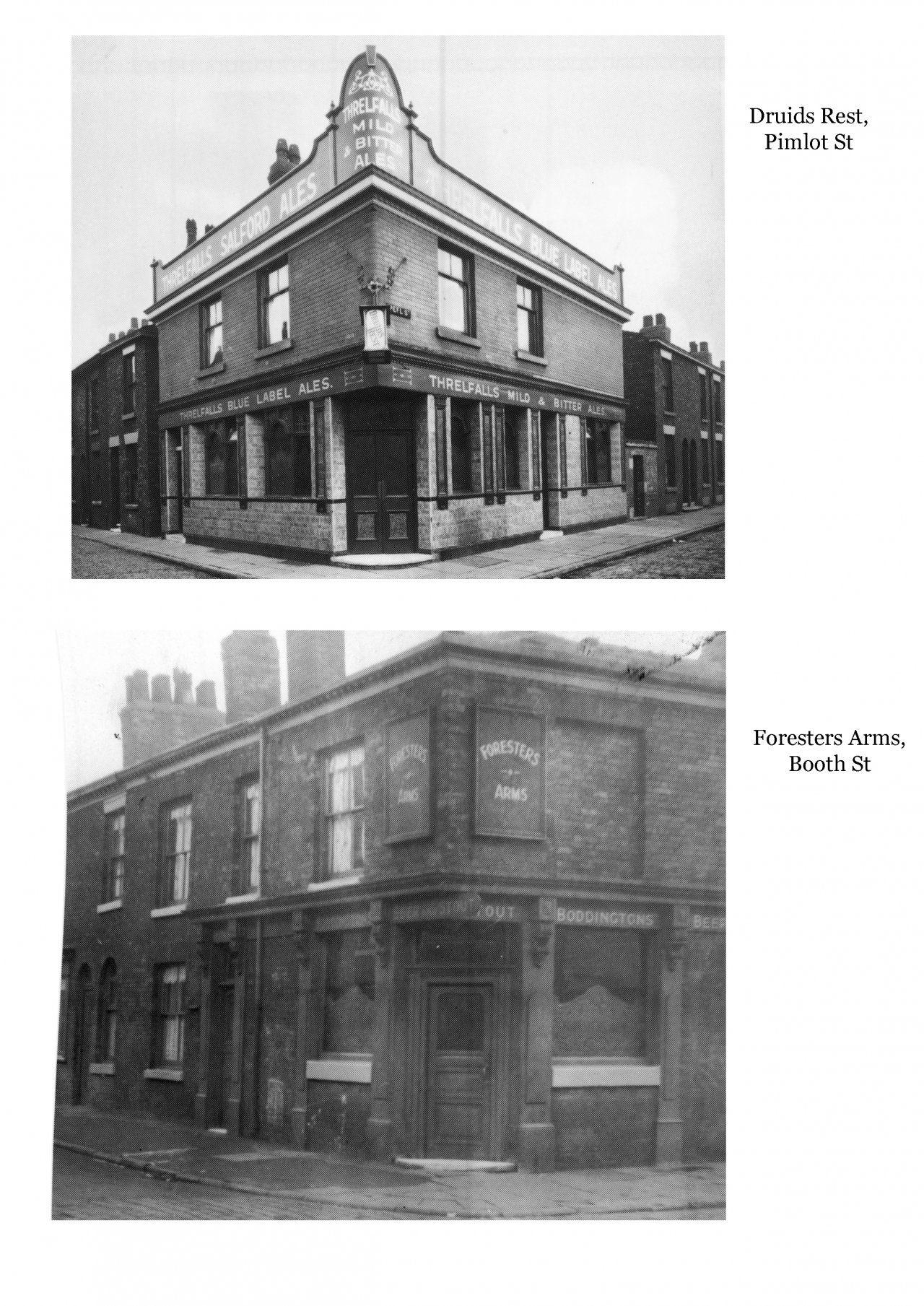 The Miners Arms, Chapel Street, first licensed in the mid-19th century, was owned by Yates' Castle Brewery of Ardwick from the early 1900s and Samuel Spivey, the tenant from 1905, was succeeded by his wife Emma about 1915; their daughter Elsie Waters took over in 1949 and was 72 when the pub closed. Some customers would "come a fivepenny bus ride to drink here again."

The Old House at Home on Pimlott Street, first listed as a beerhouse in 1858, was owned by Groves and Whitnall from the early 1890s; considered for closure in 1913, it survived because it was selling more than 6 barrels a week, as the area was so densely populated. John Yates, who arrived in 1937, was succeeded by his son Ged about 1950; Ged and Ellen moved to the Vine on Broad Street when the pub closed, then, ironically, to Holts' new Old House at Home on Whit Lane. 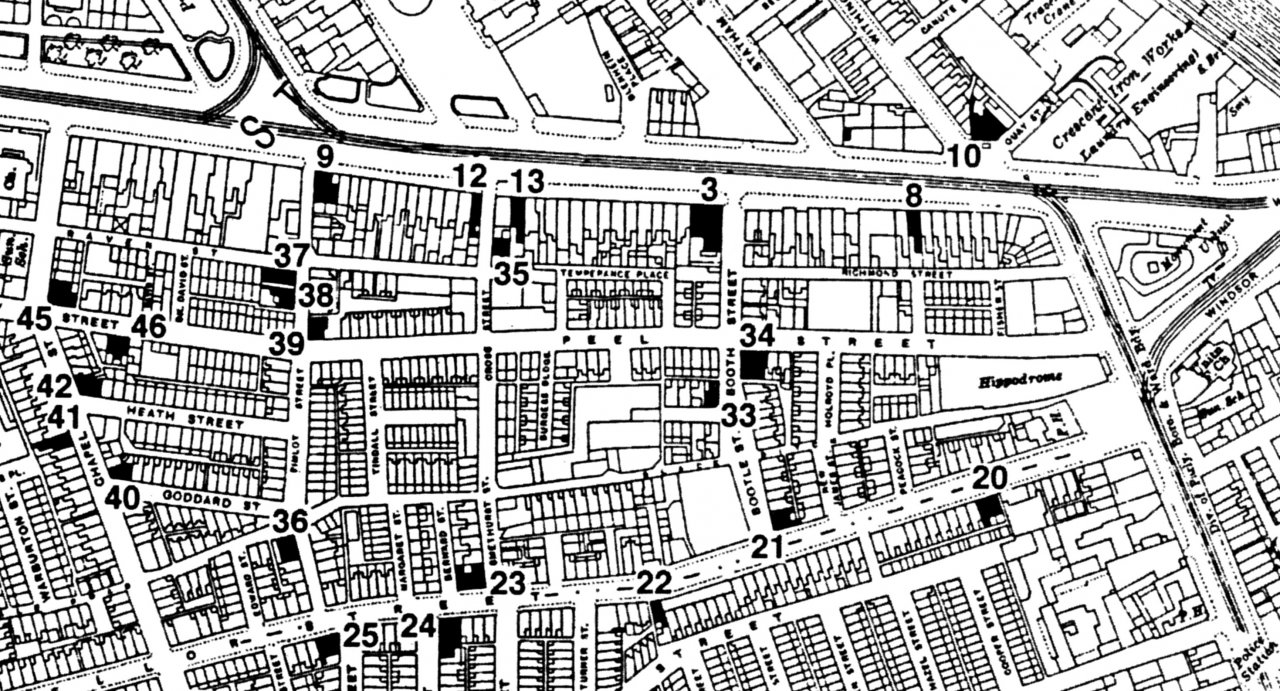 The Druids Rest nearby, also licensed in 1858, was a Threlfalls pub by the early 1900s. Alfred Rimmer, fined for serving over measure in 1907, claimed the Red Lion and Old House at Home were also doing the "long pull". Renovations in 1913 saved the Druids from closure. Harry Ralphs moved in from the nearby Prince of Wales that year; Mary Jane Ralphs took over in 1918 and was still there in the late 1930s. The last licensee, Walter Mills, went to the Coomassie on Florin Street.

The Foresters Arms, Booth Street, built in the 1840s as part of Richmond Place, was offered for sale in July 1867: "8 rooms, wash house and garden for £40 a year." The earliest recorded licensee was Stephen Emery in 1869 and the last Hilda Salt, who had been there since 1936 as a tenant of Boddingtons.

In 1855 brewer John Sawley Whittaker opened the Wellington, on the corner of Goodwin Street. He had run the Lamb, Chapel Street, but between the two was listed as a poultry and game dealer, so maybe the Wellington did better. George Whittaker took over about 1880, when the pub was rebuilt, probably by Threlfalls. In 1915 landlord Frank Smith was overheard sympathising with a German pork butcher attacked in the Lusitania riots and the pub's windows were broken. Frank stayed until 1930, though. The brewery's survey described the building as 'first class in every way', but this didn't stop the CPO and the pub closed at 9.30pm on Black Sunday.

Across the road was the Nelson, run by John, then Elizabeth Ward from 1869 to the late 19th century, when it was just a two-up, two-down corner pub. In 1899 two adjoining cottages were taken over; the ground floor frontage then stretched from Smethurst Street to Bernard Street. By 1911 it was a Peter Walker house, run by John Williams and open 6am to 11pm. John's son remembered losing a lot of custom during WW1, when the government put the price of mild up 1d, to 2Â½d. Creese's Brewery of Hyde took over about 1920 and Thomas, then Norman Livesey were licensees from the 1920s to the 1950s. Major alterations in 1939 meant it was in good condition when it closed.

The British Queen beerhouse on the corner of Bootle Street was run by John Frankland for more than 20 years from the mid-1850s, then by George Walker from the 1880s. Chesters bought it in 1899; among their long-serving tenants were James Foulkes, from before WW1 to the 1930s and Frank Watson, from the 1930s to the 1950s. The last licensee, Roy Croft, closed after dinnertime on Black Sunday, when 'The pumps were empty and the bottle shelves were bare.'

The Welcome, on the other side of Ellor Street nearer Cross Lane, opened in the 1860s. Groves and Whitnall owned it by the 1930s and although the City Engineer said it could be left indefinitely, they didn't object to the CPO because its position was 'a bit cramped'. Unlike the locals. In January 1961 the last licensee, Sid Harrison, took 1d off the price of a pint and soon had to drive off to collect three more barrels of mild. Although much housing had been demolished, faithful regulars still returned and on Black Sunday watched Sid paraded up and down Ellor Street in a coffin. Even with him in charge, though, the pub only lasted a few more weeks.

LIFE AS A LANDLADY

As customers, we don't always appreciate what the people running the pub have to put up with, and how adaptable they have to be. The following memories of Jennie Baxendale, whose family ran the Horse Shoe at Ringley from the 1930s to the 1960s were recorded some years ago. Sadly, Jennie is no longer with us, but the family still live in the area.

'My mother moved in on 6th July 1933. My father had died a fortnight before after signing up for the tenancy. It was unusual for a brewery to let a widow take over a pub - they would let a woman stay on after her husband had died, but not enter as a widow. However, it was a Bury Brewery house then and they were a small family firm: the directors were Mr. Smith and his sister and Mr. Taylor from Bury. I wrote off to them as soon as my dad died and my mother and brother went for an interview. My brother was only 21, but he was in the choir and a server at church and the Smiths were big church people, so I think that helped.' Jennie remembered a Mrs. May, who lived in a cottage behind the schoolmaster's house on Ringley Old Brow, bringing a jug to the pub every night for a pint of beer, and also a former landlord who had made a living as a coal dealer, and 'who was very nasty with Mother - he used to come and take all the tap room men out with him every Tuesday for a night out!'

Jennie also recalled the stables at the side of the pub where the boatmen used to stable their horses, and the painting over the front door which concealed the old datestone of 1725. She remembered the upstairs as being very roomy - 'we could have taken lodgers!'

'They began rebuilding the Horse Shoe on 1st May 1938 and finished it in March 1939. When it rained, we had to put oilskins over the bed and go upstairs with umbrellas!' Jennie and her husband moved into the pub in December 1939 following her brother's death in an accident. She remembered the Ringley custom of Mayor making - which also involved a lot of drinking - fading out as a result of the war - and also being robbed by a son of one Mayor to whom her mother had given many of her brother's clothes, so perhaps it was just as well. But he did get caught!

'It was a busy place when we ran it. We had 31 regular lunches from Ringley Mill and the Power Station, plus the lab boys at the mill and any occasional customers. If they had visitors at the Power Station, they would come. They used to get meat, vegetables and a sweet for 1s6d [7Â½p in today's money]. Tea was 2d and coffee 3d.'

Bury Brewery sold out to Thwaites in 1949, but the local fishermen were obviously still flourishing, even if the local beer wasn't. Jennie recalled, 'When they finally drained the canal, there were two or three men in thigh boots catching pike and they asked if they could put the fish on the tables. The least one weighed 11lb and the tables were full!' Oh, the joys of running a pub near a waterway! But Jennie's family included some keen fishermen, so she probably didn't mind.

She also told us about a colourful regular called Tommy Norris, who had lost a leg in the First World War and had been trained by the army to mend watches. Jennie's husband gave him a gold watch and he set off home slightly earlier than usual because of it. Jennie and her husband had done the glasses, cleaned the tables and were just sitting down to supper when the doorbell rang. It was Tommy's wife, looking for him: 'My brother-in-law had a garage by the gates. "Come on, Fred," said my husband - and they went to look for him. They found Tommy fast asleep by the garage in the pouring rain. They took him home, stripped him and put him to bed, and he was the first the next day - no hangover or anything! Another time, the waiter saw his bowler hat, and Tommy was asleep, covered in snow.'